In April, we had the pleasure to welcome to campus Jessica Jackley. Jessica is the co-founder of Kiva and their former Chief Marketing Officer.  Kiva launched in 2005 as the world’s first peer to peer microlending website, allowing users to lend as little as $25 to cash-poor entrepreneurs around the world. With this means of affordable capital, these entrepreneurs were able to start or expand their microenterprises. Since its founding, KIVA has loaned hundreds of millions of dollars from lenders to entrepreneurs across 206 countries.

Most recently, Jessica was the author of the book Clay Water Brick: Finding Inspiration from Entrepreneurs Who Do the Most with the Least.

Jessica gave an all-school talk, followed up with four separate small group conversations that night and the next day.

As Amanda Matias '16 put it, "I walked out of the chapel feeling so inspired and touched by the way she has decided to direct her life. Going into college and picking a major, I had the same idea of wanting to help people as much as possible. It was an amazing feeling to hear someone speak of a similar mindset." 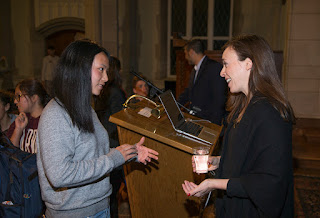