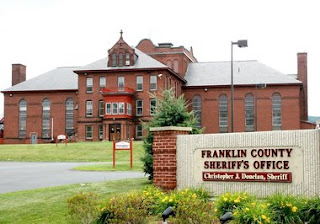 On Friday, December 11th we visited the Franklin County Jail. Not quite knowing what to expect, we arrived to the jail with heads full of questions, and a few preconceived notions about what the jail was going to be like. When we stepped inside it was a mix of heavy security and also a strange, relaxed vibe. The guards were just living their lives, drinking coffee, and going about their daily business. However, most people don’t have to leave their ID at the door, get patted down by security, and walk through a metal detector in order to begin their day of work. Once inside the jail, through the sally ports to ensure security, we met with two people who work at the jail. They told us about the Transition from Jail to Community (TJC) initiative, and more about the jail as a whole. The focus over the past decade has been on reducing recidivism rates, and helping people reenter the community successfully.
We then took a tour of the jail. It was both nothing like we expected, and exactly what we expected. There were prisoners who stared at you as you walked by the rooms they were in. It felt as if we were walking through somebody's science experiment and observing all of the subjects. We felt removed from the situation, and from the prisoners. We saw the metal slabs that they sleep on, and envisioned what it would be like to not see the open sky for years, but the truth is that no one can understand what it is like to be in jail, until you have been through it yourself.