In this project, we investigated an non-profit, local organization that tackles the serious drug problem that has been distressing the Franklin County Area. Through our research, we discovered that this organization called the Opioid Task Force (OTF) has established a network that has put numerous local institutions from educational, medical, and legal areas into partnership to create collective impact on both opioid addicts and the general society.

The Opioid Task Force takes on a need-based approach in tackling the problem. Distinguished from traditional rehabilitation centers and rehab programs in jail, OTF believes the the problem lies not only with those who suffer from addiction, but also the society as a whole. For instance, OTF identifies stigma against opioid addicts as one of their main obstacles in overcoming their addiction because it prevents them from seeking cure and causes them to become social outcasts. OTF also recognizes doctors who over-prescribe drugs as one main cause to the rampant opioid addiction today. By coming into collaboration with community partners and providing a wide range of services, from re-education programs to healthcare solutions, OTF aims to overcome this difficulty on multi-dimensional level.

OTF prides itself on its philosophy of beating down the problem from all sides, which accounts for its differences in comparison to traditional rehab business. Comparing Franklin County House of Correction, a rehab program under OTF, to traditional government funded rehabilitation center in Massachusetts, FCHC demonstrates lower relapse rate and higher community impact. However, its scalability and number of patients are lower because 1)OTF is a young organization, and 2) rather than importing high-tech devices or therapy, OTF utilize pre-existing facilities in the community to generate ultimate social impact. 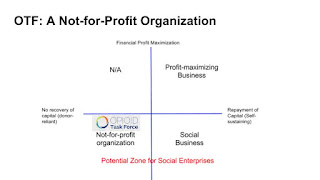 Our study on the Opioid Task Force gave us the chance to become familiar with the deeply rooted problem of opioid abuse in Franklin County--a fact that we otherwise would not be able to realize. We also appreciate this chance to look into a subject that is different from what we consider as our main area.