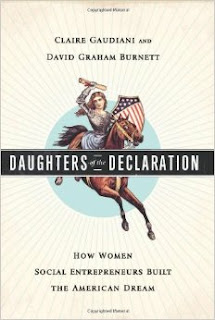 Daughters of The Declaration, by Claire Gaudiani and David Graham Burnett, is a compilation of biographies of female social entrepreneurs from the time of the civil war through the turn of the twentieth century, that, when sown together, share the history of the ever-evolving social profit sector in the American economy and community. The biographies are of many women, including Ester Reed, Elizabeth Seton, Mary Livermore, Frances Willard, Florence Kelley, Frances Perkins, among many others, who first identified, and then solved problems facing America. While motives varied from perceived religious obligation to pure patriotism, all of these women shared the same mission, to make the American ideals stated in the Declaration of Independence and the Constitution available to all people in America; although this mission manifested itself in different ways. These women created schools, fought slavery and segregation, aided the marginalized, struggled for women’s suffrage, helped the poor by providing work, waged a war on alcohol and child labor, and ultimately pressured lawmakers into creating legislation for the betterment of the union concerning the aforementioned causes. This book describes the rise of social entrepreneurship from the purely private spheres to the federal government as social activists secured positions in the government to support causes they felt to be important.
In addition to the usual hardships and risks of entrepreneurship, the women described were forced to struggle through both social and legal limitations because of their sex. As women gained more rights, especially the right to possess assets in their own name, it became easier for them to be politically active because they could manage their own funds without being tied to an organization or a man. Despite the challenges, these remarkable social entrepreneurs acted as catalysts of change by identifying an issue, gathering information, collecting sympathetic people to help, and then by providing a solution or demanding legislative change. These social entrepreneurs recognized the value in individuals, and realized that aiding individual people is making an investment for the community as a whole. While this book only talked about women, many courageous male, as well as female, entrepreneurs devoted their lives toward the betterment of the American community, and worked tirelessly to craft the delicate balance between personal enterprise and communal responsibility that America treasures today.