On Friday, September 11 the class met down by Shadow Lake. Our students did not know what we'd be doing, only to dress in appropriate clothes for an adventure in the woods, and that Glenn Minshall and Steve Allison would be involved. The latter piece of information had them excited, if concerned, about the nature of their challenge ahead. 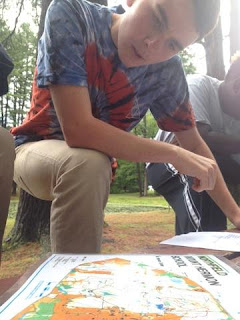 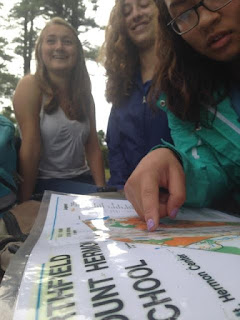 The following is a reflection written by Rhodes Fellow, Lydia Smith '17. 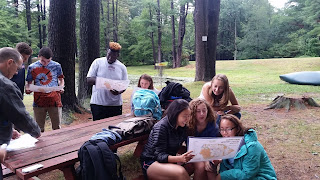 Our time on Friday was valuable because it helped change the group from a class of individuals to a team.

We were assigned the task of collecting eight letters from different locations in the woods to create a word. The word turned out to be "INTREPID" but that was by far the least significant part of the experience. As a team, we decided to split into two groups to find the assigned letters.

At first, I was super excited because I love the woods! I'm on outdoor team, and I go running, so I consider the woods familiar territory. But once the maps came out I felt a little more nervous because I am, what I like to call myself, 'map-a-matically' challenged. It turned out ok though. Once I oriented the map and my group member pointed us in the right direction I found it quite comprehendible.

I found everyone in our group to have different, helpful skills. For example, Jessica and I managed the maps and conferred mostly with each other on the direction. Eli found most (well, all) of our letters once we made it to the general vicinity. And Tyriq, as he proclaimed, offered a little comic relief for the group.

At one point, our group felt very frustrated because despite our confidence that we were in the right place, we couldn't find the letter. Communication was another hurdle our team had to overcome. The two groups were a little unclear on who was supposed to gather one of the letters.

Perhaps most importantly, our time walking in the woods also allowed for a lot of conversation and bonding.